The Layman's Biblical Handbook
​ALLEGORICAL
​This is a method of interpreting God’s Word, where a symbolic or deeper meaning is sought. Though found in the Bible, it is rare (the word “allegory” is used only one time in the Bible—see Galatians 4:24). Some might say that the crossing of the Red Sea by Israel is a type of salvation, or make some spiritual application, but “all these things happened” (I Corinthians 10:1–6, 11), and the events themselves—the miracles of the Bible—are historical. Much care is needed when the allegorical method is used, for once we leave the normal meaning of words, there is no end to the possible number of interpretations, depending solely on the imagination of the one doing the interpreting. It also becomes increasingly harder to verify the accuracy of the interpretation (see INTERPRETATION).

ALLELUIA
​Strong’s gives for “Alleluia” = “praise ye the Lord.”  Strong’s also said that it originally came from two Hebrew words: “halal,” meaning “praise,” and “Yahh,” meaning “Jehovah in the shortened form” (see Revelation 19:1–4). “Alleluia” = “Praise Jehovah.”
ANGELS
The word “angel” in the Bible means “messenger” (Strong’s Concordance) and they are mentioned about 300 times* in the Bible, more than the great patriarch Abraham. My point is they are well attested to in the Bible and not something rare. *(Not counting the term “Angel of the Lord,” “cherubims,” “watchers,” “seraphims,” or “archangel.”) They are spirit beings sent to minister to believers (see Hebrew 1:7, 14). Angels observe what is happening on the earth (1 Corinthians 4:9). They can take on a bodily form and be seen (Hebrews 13:2). Certain ranks of angels have wings (1 Kings 8:6–7 and Isaiah 6:2). They can also appear without wings and look like humans (Hebrews 13:2). Believers have angels watching over them (Hebrews 1:13–14 and Matthew 18:10). Their numbers are more than one could count (Hebrews 12:22). They have power and can exert physical strength (Acts 5:19 and Acts 12:7, 23), and they can “touch” (1 Kings 19:5–7), “smite” (Acts 12:7), and “kill” (Isaiah 37:36; Acts 12:23). We are not to pray to or worship them (Colossians 2:18 and Revelation 22:8–9).
There is a spiritual realm (Colossians 1:16), and if it were possible for man to have a “spiritual antenna,” he could see things in the spirit realm, just as a radio or TV antenna gives us sights and sound from radio waves (2 Kings 6:14–17). Christ Himself is in the midst of every group of believers (Matthew 18:20). Every believer is “sealed” by the Holy Spirit (Ephesians 1:13), and though we cannot see this, those in the spirit realm do. And besides the holy or elect angels, there are also evil angels, or devils (Acts 16:18; Acts 19:13–17; see DEVILS; see ALIENS). And there is a spiritual warfare (Daniel 10:3, 12–13; Ephesians 6:10–18): “For though we walk in the flesh, we do not war after the flesh: (For the weapons of our warfare are not carnal, but mighty through God to the pulling down of strong holds;) Casting down imaginations, and every high thing that exalteth itself against the knowledge of God, and bringing into captivity every thought to the obedience of Christ” (2 Corinthians 10:3–5). (see ALIENS 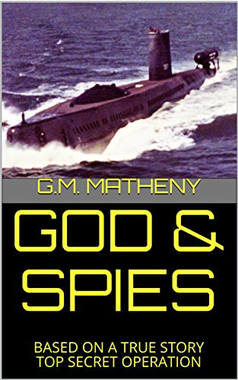 GOD & SPIES
BASED ON A TRUE STORY
GM Matheny was a US Navy saturation diver on the nuclear submarine USS Halibut. Involved in "Operation Ivy Bells". America’s most important (and most dangerous of the Cold War) clandestine operations. If you like good old fashioned American bravado, espionage and American history, you will enjoy this book.
The Mount Everest of Spy Missions
Firsthand Account of History's Greatest Intelligence Coup. Operation Ivy Bells was not a onetime intercept of foreign intelligence but an ongoing operation of multiple Soviet military channels, twenty-four hours a day, seven days a week, which lasted for years! Another reason for the high interest in our operation was the audacious nature in which it was done—with not one person risking his neck but a whole crew of a nuclear submarine.
How did I end up as a navy diver, four hundred feet down in a frigid Russian sea? After making my dad totally disgusted with me, I set out to make him happy. “Honour thy father”  - I struggled with a decision to serve God. “Lord, I will give my life to you and serve you if you let me make this dive.” But I had the impression He only wanted to know one thing: “What if I do not let you? Will you serve me anyway?”