The Layman's Biblical Handbook
THANKFULNESS. One of the signs of the last days is being “unthankful” (II Timothy 3:2). God is concerned that we recognize both Him and others who have helped us. “And as he entered into a certain village, there met him ten men that were lepers, which stood afar off: And they lifted up their voices, and said, Jesus, Master, have mercy on us. And when he saw them, he said unto them, Go shew yourselves unto the priests. And it came to pass, that, as they went, they were cleansed. And one of them, when he saw that he was healed, turned back, and with a loud voice glorified God. And fell down on his face at his feet, giving him thanks: and he was a Samaritan. And Jesus answering said, Were there not ten cleansed? but where are the nine?” (Luke 17:12-17) Being thankful is the opposite of complaining. “[T]hat there be no complaining in our streets. Happy is that people, that is in such a case: yea, happy is that people, whose God is the LORD.” (Psalm 144:14-15) The Bible teaches us to count our blessings, “Bless the LORD, O my soul, and forget not all his benefits: Who forgiveth all thine iniquities; who healeth all thy diseases; Who redeemeth thy life from destruction; who crowneth thee with lovingkindness and tender mercies; Who satisfieth thy mouth with good things; so that thy youth is renewed like the eagle's.” (Psalm 103:2-5)

THEOLOGY comes from two Greek words; “theos” = God, and “logia”, = words or sayings. Theology is the study of Who God is and His relation to man. We cannot properly love God if we do not know Who He is. The doctrine (teaching) of God often centers on His attributes (characteristics). God is holy, love, just, all powerful, everywhere present, all knowing, and so forth. (See GOD, see TRINITY, see JESUS).

​THEISTIC EVOLUTION. The false belief that God used evolution to create man. It is also tied to the “Day age theory”, that holds to the six days of creation as being six long ages. I have seen this before as each day representing 1,000 years, but six days times 1,000 years, or 6,000 years, would, of course, not be enough time for evolution, nor would six million or six billion years be enough time to turn “dirt into man” via the theory of evolution. The Bible said that each day of creation was an “evening and the morning….” No place for millions of years here. (See CREATION) 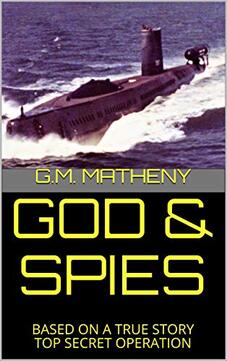 ​                                                                    Our Newest Book
GOD & SPIES
GM Matheny was a US Navy saturation diver on the nuclear submarine USS Halibut. Involved in "Operation Ivy Bells". America’s most important and most dangerous of the Cold War clandestine operations. If you like good old fashioned American bravado, espionage and American history, you will enjoy this book.
Based on True Events -The Mount Everest of Spy Missions
Firsthand account of history's greatest intelligence coup. Operation Ivy Bells was not a onetime intercept of foreign intelligence, but an ongoing operation of multiple Soviet military channels, twenty-four hours a day, seven days a week, which lasted for years! Another reason for the high interest in our operation was the audacious nature in which it was done—with not one person risking his neck but a whole crew of a nuclear submarine.
How did I end up as a navy diver, four hundred feet down in a frigid Russian sea? After making my dad totally disgusted with me, I set out to make him happy. “Honour thy father”  - I struggled with a decision to serve God. “Lord, I will give my life to you and serve you if you let me make this dive.” But I had the impression He only wanted to know one thing: “What if I do not let you? Will you serve me anyway?”
BOOK EXCERPT "The tenders in the dive chamber who are bringing in Red Diver’s umbilical cable, unexpectedly have his cable ripped out of their hands! One of the tenders says, “What’s going on?” Matheny’s fins have landed back onto the first leg of the DSRV, which keeps him from sliding back any farther. He then pulls toward him about 30 feet of his umbilical cord and makes a dash for the next leg coming down from the DSRV. He makes it, but the red light shining in Matheny’s face is reminding him he is running out of time. From his position, he can see the light shining down in the water from the entry point back into the dive chamber. He positions himself to push off the last leg of the DSRV so he can enter the dive chamber. Then unexplainably he is again jerked backward with another sharp pull! This time his face mask slams into the leg of the DSRV. Matheny hurriedly makes a grab for this leg clinging to it."
Paperback 273 pages, $12.90 https://www.amazon.com/dp/1075452430
Kindle $6.30 https://www.amazon.com/dp/B07TCSLFWR
What others are saying.
Pastor Marvin McKenzie (February 7, 2018)
“Garry Matheny is a friend and a fellow preacher. Prior to his salvation he served in the Navy as an elite saturation diver. He was involved in one of America’s most important and dangerous clandestine operations."
"Garry does a marvelous job of weaving recently declassified information regarding the operation, the record of an intelligence analyst spending the rest of his life in prison for selling the details of this operation to the Russians and his own eyewitness account of the operation itself."
"If you like good old fashioned American bravado, espionage and history, you will enjoy this book.”
David Meyer (February 26, 2018)
“I could not stop reading once I started. This book is for anyone that likes stories about submarines, divers, spies and or scripture. It’s all there in this interesting book.”
Amazon Customer (March 5, 2018)
“The flow of logic of the whole episode was great. Once I started reading it I couldn't stop.”
RUSSIA WILL FIGHT ISRAEL