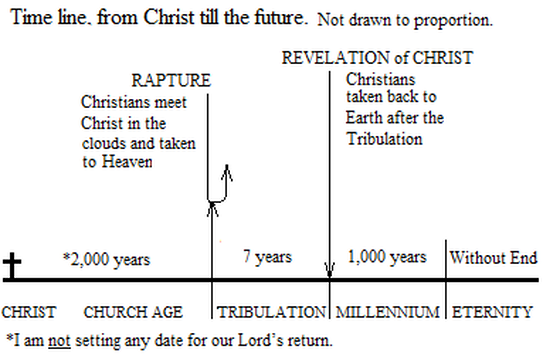 RAPTURE
Before the tribulation (Revelation 6–19), Jesus will return and take Christians out of the world by first giving us new bodies that will never die (1 Corinthians 15:51–53), and then bring us to heaven (John 14:1–4); this is called the rapture. The word “rapture” is not in the Bible, but it is called being “caught up.” “For this we say unto you by the word of the Lord, that we which are alive and remain unto the coming of the Lord shall not prevent them which are asleep. For the Lord himself shall descend from heaven with a shout, with the voice of the archangel, and with the trump of God: and the dead in Christ shall rise first: Then we which are alive and remain shall be caught up together with them in the clouds, to meet the Lord in the air: and so shall we ever be with the Lord” (1 Thessalonians 4:15–18). “Behold, I shew you a mystery; We shall not all sleep, but we shall all be changed, In a moment, in the twinkling of an eye, at the last trump: for the trumpet shall sound, and the dead shall be raised incorruptible, and we shall be changed” (1 Corinthians 15:51–52).
The worst is yet to come. “For then shall be great tribulation, such as was not since the beginning of the world to this time, no, nor ever shall be. And except those days should be shortened, there should no flesh be saved” (Matthew 24:21–22).
But we escape! We are “caught up together with them in the clouds…Wherefore comfort one another with these words” (1 Thessalonians 4:17–18). All of these signs given above are during the tribulation, and those who are saved during the tribulation are from after the church age. The church is not mentioned in Matthew chapter 24, but Israel is. In verse 15 it says, “Stand in the holy place,” which is the temple. In verse 16 “Judaea” was to flee, not any other country. In verse 20 believers of that time are to pray that their flight be not on the “sabbath day.” How could Christ forget Sunday, or churches? Because we will be raptured before the tribulation period.
In the book of Revelation, the tribulation takes place between chapter 6 and chapter 19. The church is not mentioned during that time, but Israel is mentioned several times. Did Christ forget his bride, the church? No. For there is one time the church is mentioned during the great tribulation (Revelation 6–19), but it is not on earth where the tribulation will be but in heaven at the marriage supper of the Lamb. In the Bible the “Lamb” represents Christ (John 1:36), and His “wife” is the church (Ephesians 5:31–32).
Revelation 19:1 takes place “in heaven,” and then in verse 7, His servants rejoice and say, “For the marriage of the Lamb is come, and his wife hath made herself ready.” Then in verse 11: “And I saw heaven opened,” for Christ and the armies of heaven are preparing to leave and come back visibly to earth to destroy the Antichrist and his armies at the battle of Armageddon (vv. 14–21; see ARMAGEDDON). So the marriage of the Lamb with His bride is not only taking place in heaven but during the time of the great tribulation here on earth. That is one reason the rapture is called the “blessed hope” (Titus 2:13)—because we will miss all the suffering of the tribulation. After the great tribulation will be the millennial reign of Christ on earth (Revelation 20:1–15; see MILLENNIUM), and then the beginning of eternity (see
FINAL STATE), during which will have a “new heaven and a new earth” (Revelation 21:1).

REDEMPTION
Strong’s has “a releasing effected by payment of ransom.” “In whom we have redemption through his blood, the forgiveness of sins” (Ephesians 1:7). It has the meaning of a slave who was bought at an auction and then released to freedom. And this redemption lasts forever, “having obtained eternal redemption for us” (Hebrews 9:12; see ETERNAL LIFE).

REINCARNATION
This subject of reincarnation is not taught in the Scriptures, but instead the Bible teaches the resurrection from the dead (see RESURRECTION; see 1 Corinthians 15:12–23). “And as it is appointed unto men once to die, but after this the judgment” (Hebrews 9:27), we do not die multiple times but “once,” and then “judgment” comes afterward. Who wants to keep coming back here to this sin-cursed earth? It’s been “fun,” but once on earth is enough.
There are countries with a higher population per square mile than the country of India, but they are not having the hunger problems that India has. In India there are over 200 million “sacred cows” (not to mention other farm animals), and because of the belief in reincarnation the people will not eat them. But the cows eat, not only grass but also grain, and more than a human would.
RUSSIA WILL FIGHT ISRAEL